What are you going to talk about tonight?

Increasingly, there are calls on behalf of activists, artists, scientists, and social movements that we collectively declare a climate emergency and demand that governments act to immediately decarbonise. I’m trying to bring some critical questioning to this demand. One of my central concerns is: How can we possibly think of asking governments to declare a climate emergency when governments themselves are thoroughly corrupted and complicit with petrocapitalist interests and anti-democratic governance? Emergency politics is a dangerous area. In the States, President Trump has already declared emergency a number of times in relation to migration, for instance. President Jair Bolsonaro in Brazil is happy to declare emergency in relation to state security. President Rodrigo Duterte in the Philippines is also operating under emergency conditions. Israel and its occupation of Palestine is the world’s longest-standing state of exception.

Given the widespread ethnonationalism and right-wing populism, to ask governments to declare an emergency is a gift to post-democratic totalitarianism. Climate politics can actually operate in a way that is completely reactionary. I examine Extinction Rebellion as one example of a group manifesting emergency demands that might work in all sorts of inadvertent negative ways. I consider their forms of activism, their visual politics, their collective performances, their performance of funerals and die-ins. It’s an exploration of the aesthetics of activism or the becoming-activism of art – where the boundaries between art and politics are breaking down, and emergency claims are limiting the scope of our critical faculties, which also can restrict our political analysis in ways that are detrimental to the movement, and what it might otherwise be, as radical, emancipatory, intersectional, decolonial, anti-capitalist.

Another aspect of the talk is how to conceive emergency. While Extinction Rebellion situates catastrophe in the near future, lots of other groups argue we are already living in a post-apocalyptic time. For at least five hundred years we’ve been living with colonial invasion, forced displacements, climate transformation, slavery, and genocide. What if we date climate catastrophe to 1492 with the invasion of the Americas? What does that do to our analysis of what climate emergency is? XR USA usefully adds a fourth demand that recognizes the importance of climate justice, declairing Climate Change = Mass Murder. It is crucial to add specificity to this claim. And what if we look at climate emergency as something that continues to unfold in the present in relationship to disastrous conditions of migration that are often driven by climate transformation, by drought or rising seas or agricultural failure or ecosystem breakdown? The response from state leaders like Trump is to ask: How can we shut down borders, how can we militarise and securitise the nation-state boundaries to keep people out? But with this example, we can see that climate emergency is about much more than global warming or melting ice. This needs to be the target of our aesthetics and politics.

There seem to be at least two contesting ideas of emergency: the global emergency beyond borders, which is about our common condition, and the nation-state’s reaction, trying to protect privileges and keep out the migrants and the chaos that results from the breakdown of ecological systems. So, that’s a war, right?

Absolutely. We’re in a war of the worlds, a global cosmopolitical conflict about what kind of future we want, one necessarily different from the now, even though many corporations are happy keeping us locked into an indefinite present of supposed economic growth and wealth accumulation. My current research is about expanding the vocabulary of climate change so the climate isn’t just about carbon in the atmosphere, but also power on the ground. What would climates of economic inequality be? What would climates of institutionalised racism, of white supremacy, or climates of authoritarianism be? These are all elements of “climate control” rather than the very narrowly defined “climate change,” a generic term that Extinction Rebellion tends to depoliticise. How can we change our vocabulary to facilitate more nuanced and politically enabling discussions?

Do you think Extinction Rebellion tries to be like Occupy, a broad coalition of different voices, by not being very specific in their politics?

One of the defining ways they describe themselves is that they are “beyond politics,” which means that they claim to be addressing universal concerns. Climate change has to do with the breakdown of the earth’s systems, which will put all life in jeopardy, including the lives of more-than-humans – animals, plants, and so on. One could say it’s a post-anthropocentric version of Occupy, premised upon an insurgent multispecies universality. At the same time, they tend to collapse important differences within this universal language, which produces problems. Not only does Extinction Rebellion neglect historical injustices associated with the long history and present continuation of climate injustice – in colonialism, capitalist extraction, forced labor, mono-crop agriculture – as groups like Wretched of the Earth point out (see their open letter to Extinction Rebellion). They also surrender the political traction that would come with identifying the perpetrators and culprits of the fossil fuel corporations, the lobbyists, the politicians who’ve supported climate breakdown, especially over the last decade, including its misinformation and climate-denial campaigns. Extinction Rebellion’s “beyond politics” seems to mean it’s trying to find solutions that are acceptable to ruling class fossil fuel interests, such as techno-fixes, geoengineering, and market-based mechanisms, which are more about creating new markets than ecological transformation – even if that’s not Extinction Rebellion’s explicit aim. This is all unacceptable from a more radical perspective that argues that continued economic growth is simply not compatible with real climate solutions – especially where climate solutions necessarily must be founded upon social justice, equality, and democratic inclusivity. Otherwise, we face a near future of climate fascism, already discernible in today’s political formations. The point isn’t to oppose Extinction Rebellion, however, but rather to contribute to its movement by clarifying its aims, and radicalizing its analysis, and struggling with it for real solutions based in grassroots opposition to capital and its manifold climate injustices.

What if we focused on other types of gasses – teargas, for instance – as an exemplary medium of climate control? Focusing on the weaponisation of the atmosphere, made possible by arms manufacturers and militarised police, shows the political antagonisms, social violence, and authoritarianism on the ground in terms of climate control. Its calculus of causality, its distribution of effects, its economic basis is much clearer than carbon or methane, which tend to be much more abstract in each case.

This thought experiment – though it is certainly more than that for the gassed and maimed, detained and dispossessed – is motivated by recent artistic and activist events that took place at the Whitney Biennial in New York earlier this year, commonly referred to as The Teargas Biennial. There was an activist movement – including the collective Decolonize This Place – that focused strategically on a member of the Whitney Museum’s board of directors, Warren Kanders, who is the CEO of a corporation called Safariland which makes tear gas, including the tear gas used against migrants on the US-Mexico border, by police in Ferguson against Black Lives Matter protesters, and by Israel in the occupation of Palestinian lands. Participatory agitprop aesthetics were mobilised to raise consciousness about how people like Kanders are artwashing their money through the Whitney Museum to put a philanthropic face on their military profiteering, typically directed against migrants, people of colour, and the disenfranchised.

The group Forensic Architecture made an important video, included in the Biennial, about Kanders and tear gas, testing the limits of the liberal art institution and its willingness to support discussion critical of its financial structure. The campaign was successful: eventually, Kanders was kicked out. For me, these examples show how experimental and political artistic practice, challenging the boundaries of institutional control, can not only succeed in directed forms of institutional but also meaningfully expand our understandings of “climate change” and ecology at this moment when sociopolitical and economic inequality extreme. The anti-Kanders campaign shows how climate emergency is also a social and political emergency, an economic emergency, and all the strands are connected. To the museum, in other words, would address none of these emergencies of injustice, however. For me, seeing emergency as multifaceted means we have to think emergencies together.

The art world is overflowing with works trying to address the climate emergency. How do you feel about the artworks that are trying to deal with the mess we’re in?

This is truly a time of unprecedented emergency – from the breakdown of ecosystems to endless war, from xenophobic ethnopopulism to militarised police and anti-democratic repression – and we need all hands on deck. Not surprisingly, art is undergoing a structural transformation, perhaps an extension of colonial modernity’s own breakdown and anti-colonial revolutions: we’re facing the becoming-activist of art, where previously dominant art forms dedicated to autonomy and originality and individual acts of creativity, supported by markets, contained in white cube galleries, are moving towards something different. Art is overspilling its disciplined borders, becoming collective, directed toward political transformation, sometimes enacting the world we want to live in through its speculative imagination and aesthetic experiments in sensibility. From the Zapatistas to the struggles against fossil fuel pipelines, from Extinction Rebellion to decolonial feminist social movements, modes of seeing, thinking, and becoming otherwise are contributing to collective creativity.

These formations are symptomatic of the collapse of democracy, where multitudes don’t find that they can articulate grievances in conventional political channels; they also indicate the fact that people are finding that the privileged spaces of commercial galleries and museums are no longer, or never really were, places of diverse social inclusion and political transformation. Instead, they are neoliberal machines of carbon subject production, teaching people to be respectful consumers of elite culture, sponsored in some cases by wealthy patrons like Warren Kanders, where ‘critique’ and ‘politics’ typically have no teeth.

The art space in the widest sense of the term can still be a place of speculative thinking and experimental practice, and I think we need that more than ever. I’m continually reminded of this phrase that Walter Benjamin used during World War II, that the state of emergency has become the norm, but it’s one mobilised by fascism, which attempts to define the present as the inevitable consequence of history. Instead of that kind of emergency, we need to create our own emergency that supports radical anti-fascist interests. That’s where I think there are lots of possibilities for creative, speculative, and imaginative thinking, thinking that’s engaged and is necessarily informed by the traditions of the oppressed, as Benjamin wrote. 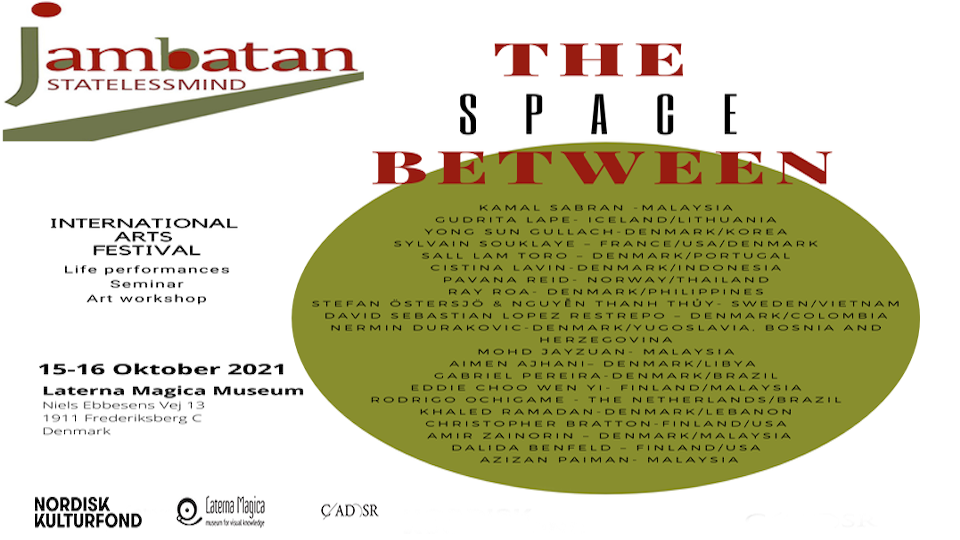